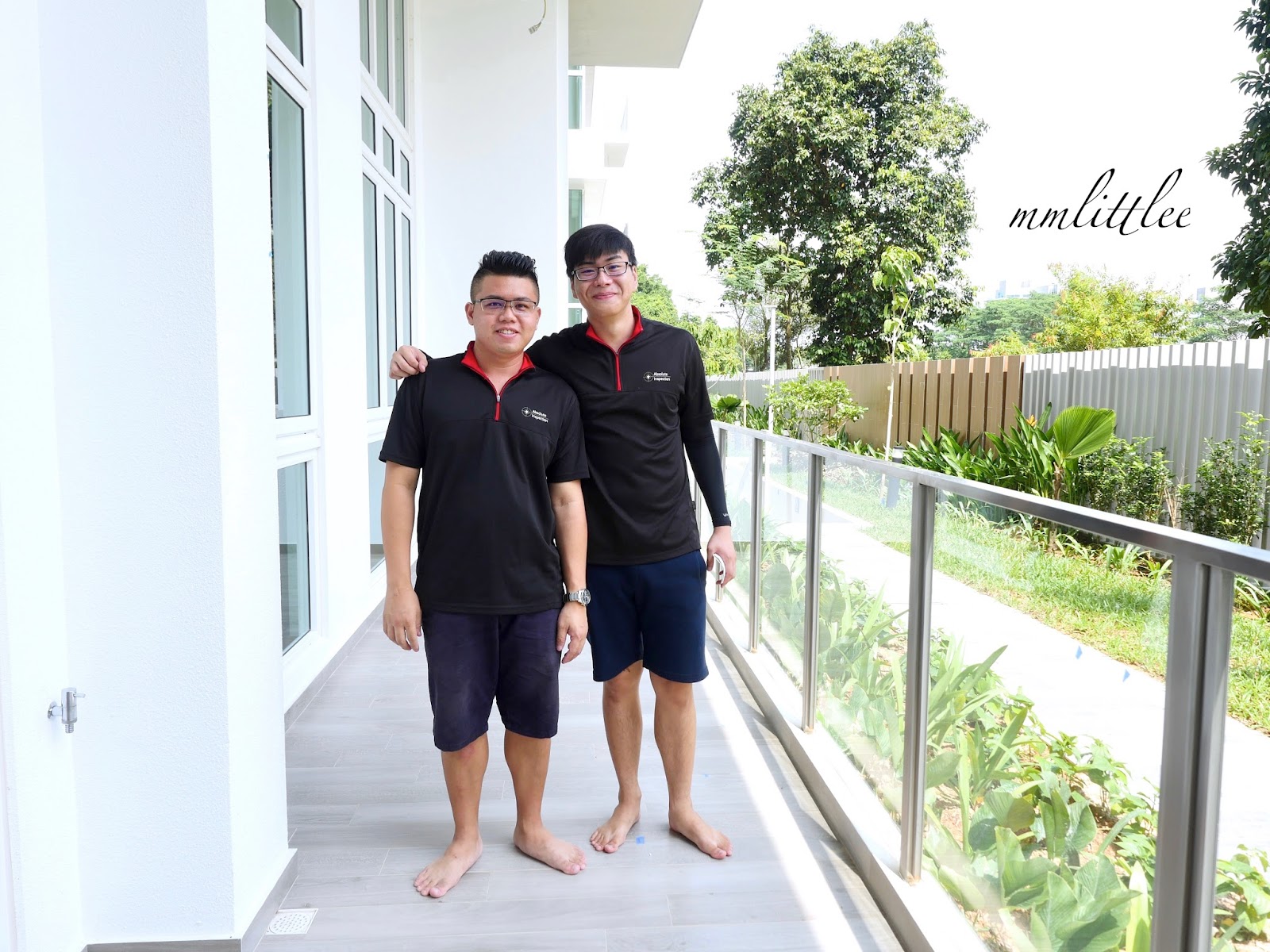 They call themselves The Trusted Defect Check Team and I couldn’t agree more. Not just because we are collaborating on this together but I really wouldn’t be able to spot so many crucial defects that needed rectification if I were to do this on my own. Sure. I would turn the tap on in the toilets to check if it runs and stops as it should. However, I wouldn’t put the stopper in place to check if it really does stop the water from seeping through. The professionals at Absolute Inspection took no shortcuts and had that checked as well. To our dismay, both basins had stoppage issues. Things like these we would probably realise only after shifting in.
On the day of key collection, Meyer and I were present for it. We walked through the house and could spot bad workmanship even from our inexperienced eye. There – the toilet door was stuck. Here – the floor is uneven. The list goes on and we shook our heads in disappointment. We were very interested to know the list that Absolute Inspection would make out of #mmlittle家.
I gave a quick text to the founder of Absolute Inspection, Wee Kwang, to share what a letdown it had been and he advised I prepared at least 10 pages of empty inspection list for his team. Now I was getting worried about how long this was going to take! 10 pages! Even the developer looked at me in disbelief when I requested he photocopied them for me.
After the first inspection which took three hours, they picked up 119 defects! How in the world? Every little scratch on the window is considered a defect. Well frankly, would you mind a slight scratch on the glass of your window? Probably not but if you had like 11, you would probably like them replaced. 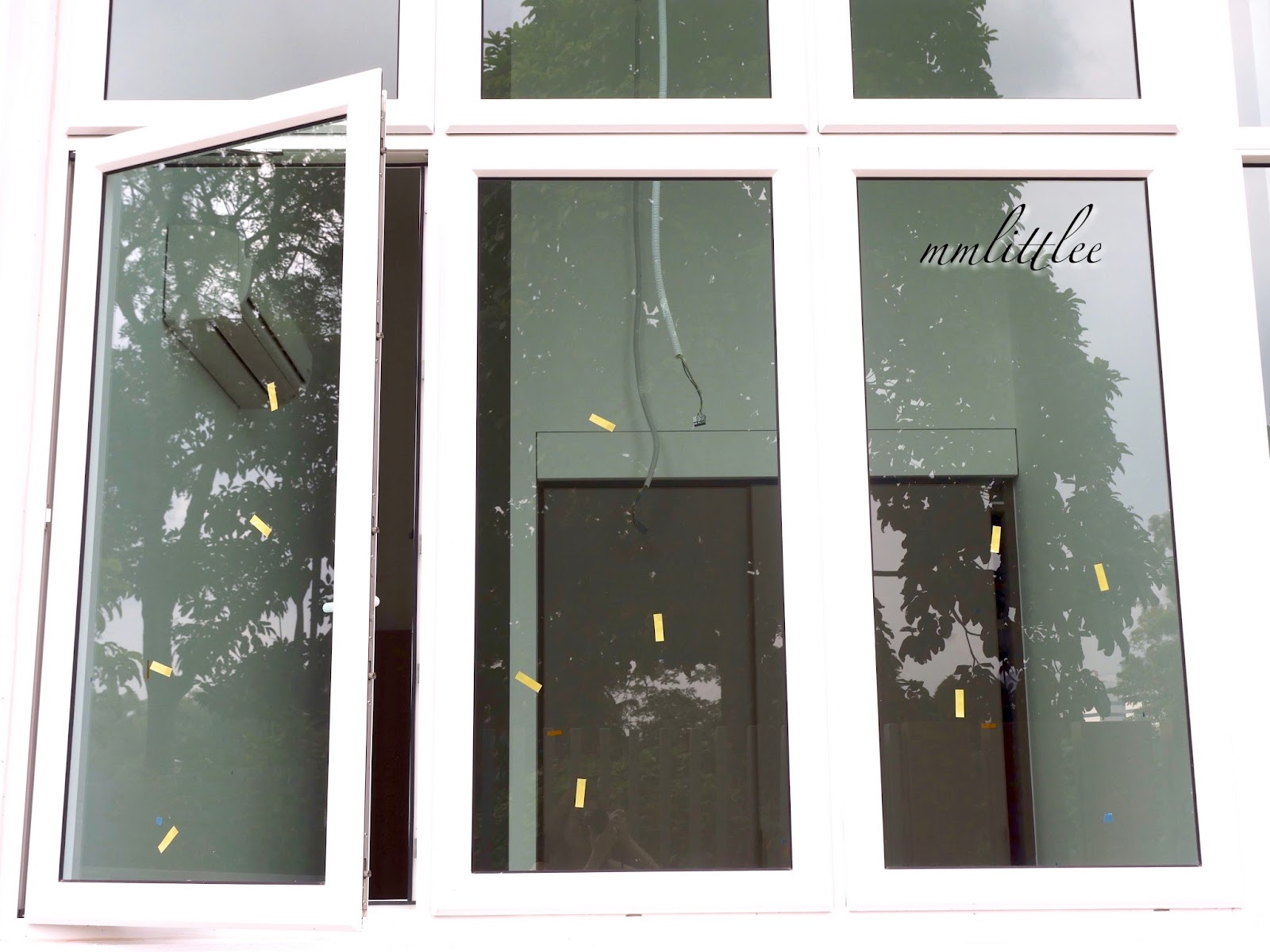 As least my husband would!
In his own words,
“I want the house to be perfect for the amount of money I paid for it. How much is it to hire Absolute Inspection to give the home a thorough check? S$650 for three visits? Everyone should engage a professional to pick out the nitty gritties! It costs less than one percent of the total amount I spent on this house!” 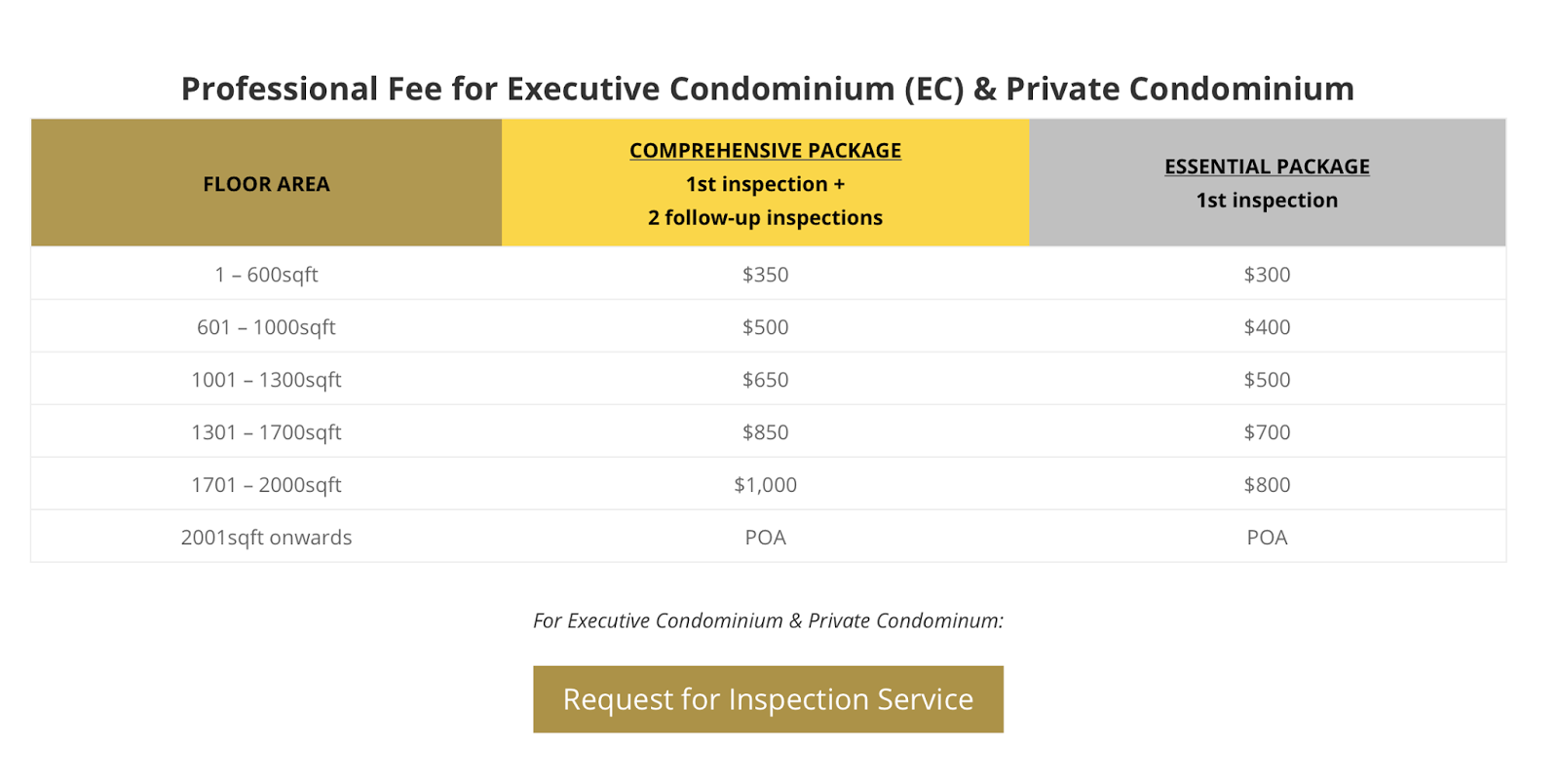 Wee Kwang sent two of his abled assistants Kim [Chief Inspector] and Ben [Senior Inspector] to meet me at #mmlittle家 that morning. I wasn’t told how long this might take but with two inspectors, I assumed an hour to get the list submitted.
When Kim told me that a first inspection could take up to six hours, I gasped in shock! Then added, “With Ben coming, it will take half the time for two of us to map out all the defects.”
Three hours? I was still in shock. That is extremely thorough and do I really have to hang around for three hours? Thank goodness I had Kim arrived at my place at 0900 hours because I would be late to pick the kids from school otherwise!
My home was peppered in pinks, blues and oranges by the end of the inspection! Kim and Ben picked out 119 defects and used nine pages of the defect list including the cover page.

Just to name a few that are totally unacceptable and quite missable without a keen eye,
1. Cracked tiles in the patio
2. Uneven floor, scratched marble and poor workmanship
3. Aircon compressors that were not bolted down to the floor
4. Slightly crooked electrical socket alignment
5. Shoddy work from insufficient rubber insulation on the door
6. Chipped wood on the main door
7. Stiff switches which can be smoothened out when pressed
8. Noise from the wardrobe door when sliding
9. Bedroom doors not being able to latch
10. Missing cap on window handles
To be honest, I would probably noticed only point number 5 because that was pretty obvious. I definitely would not know that the aircon compressor was required to be bolted down to the ground! 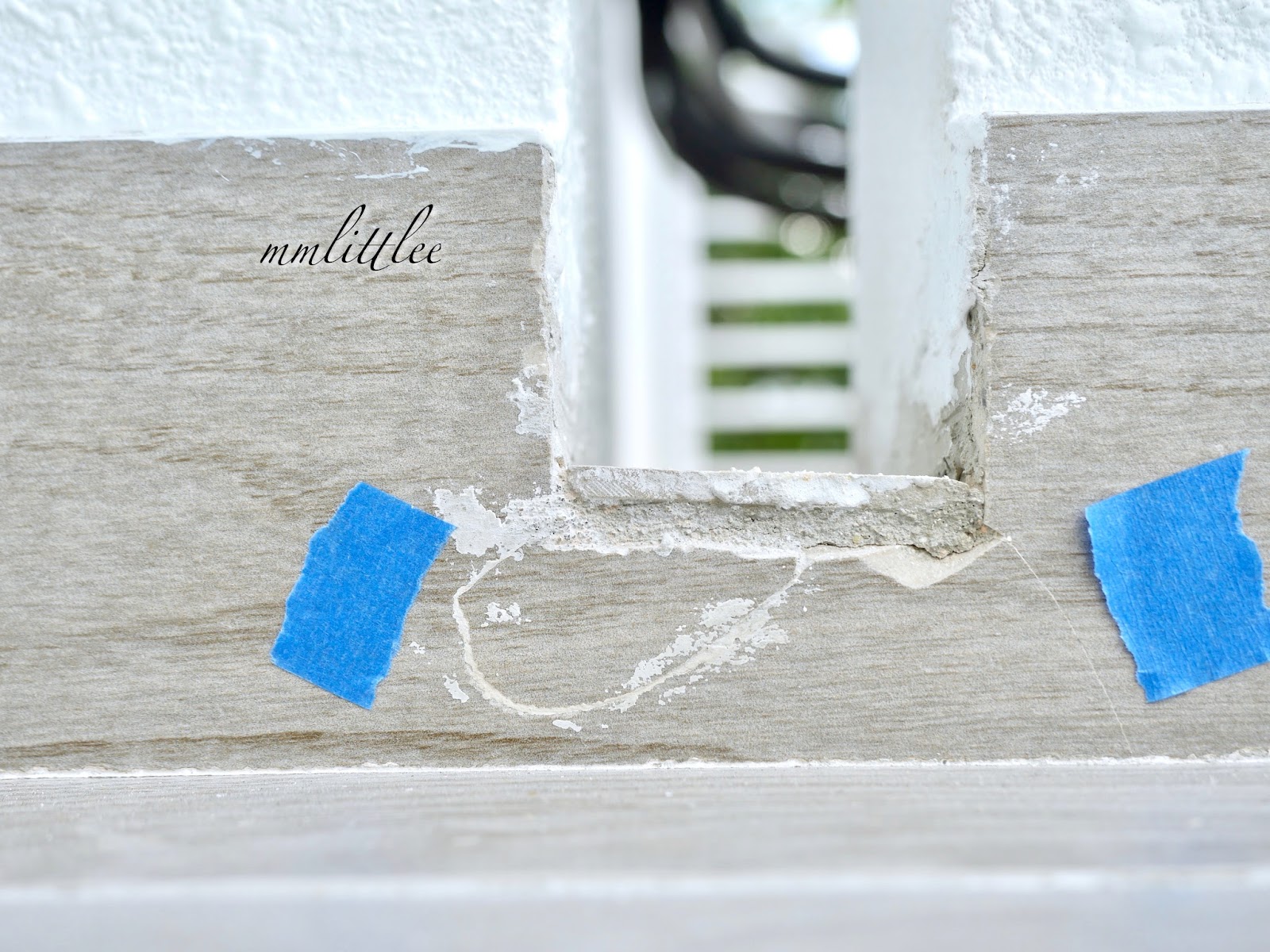 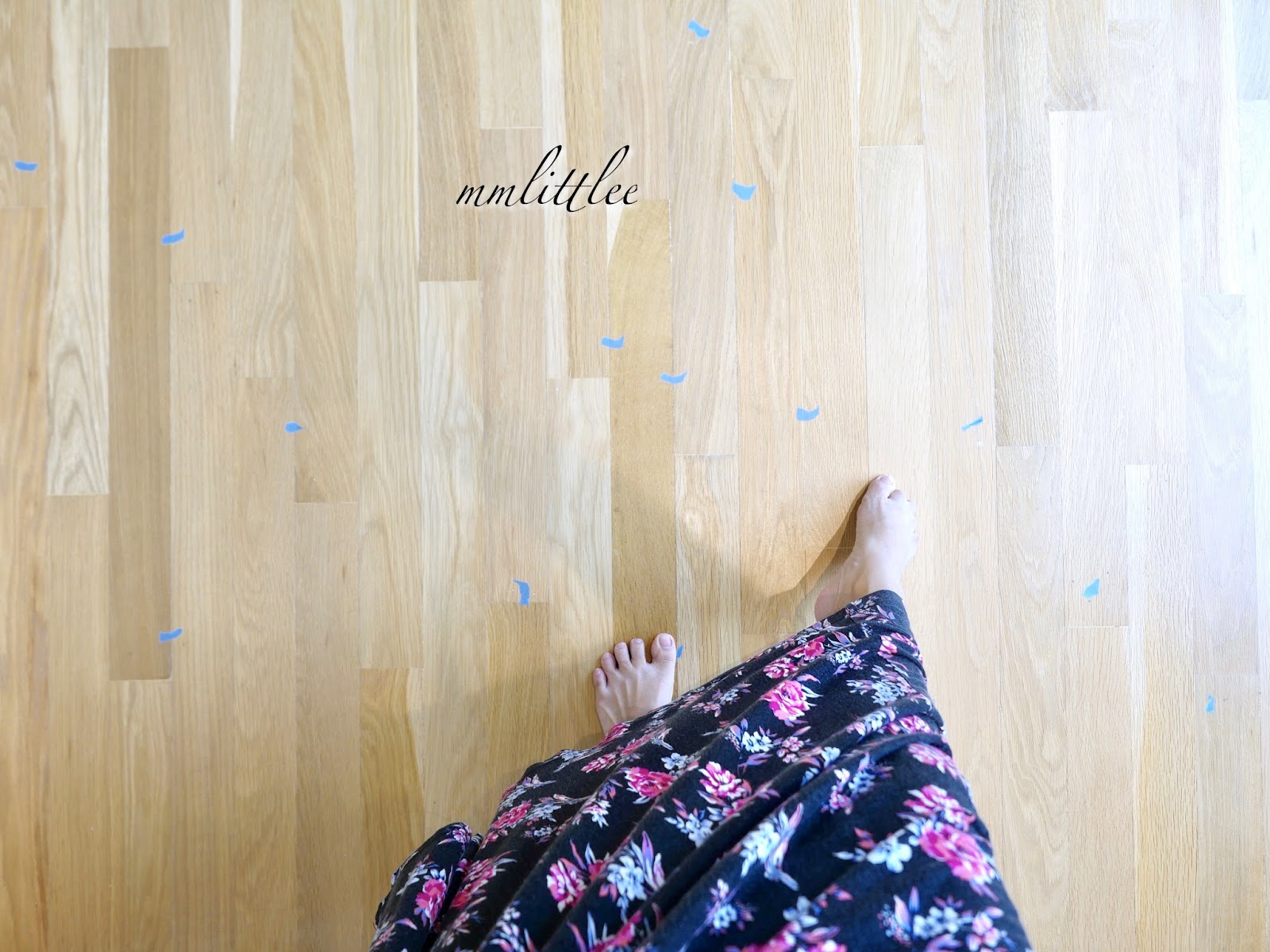 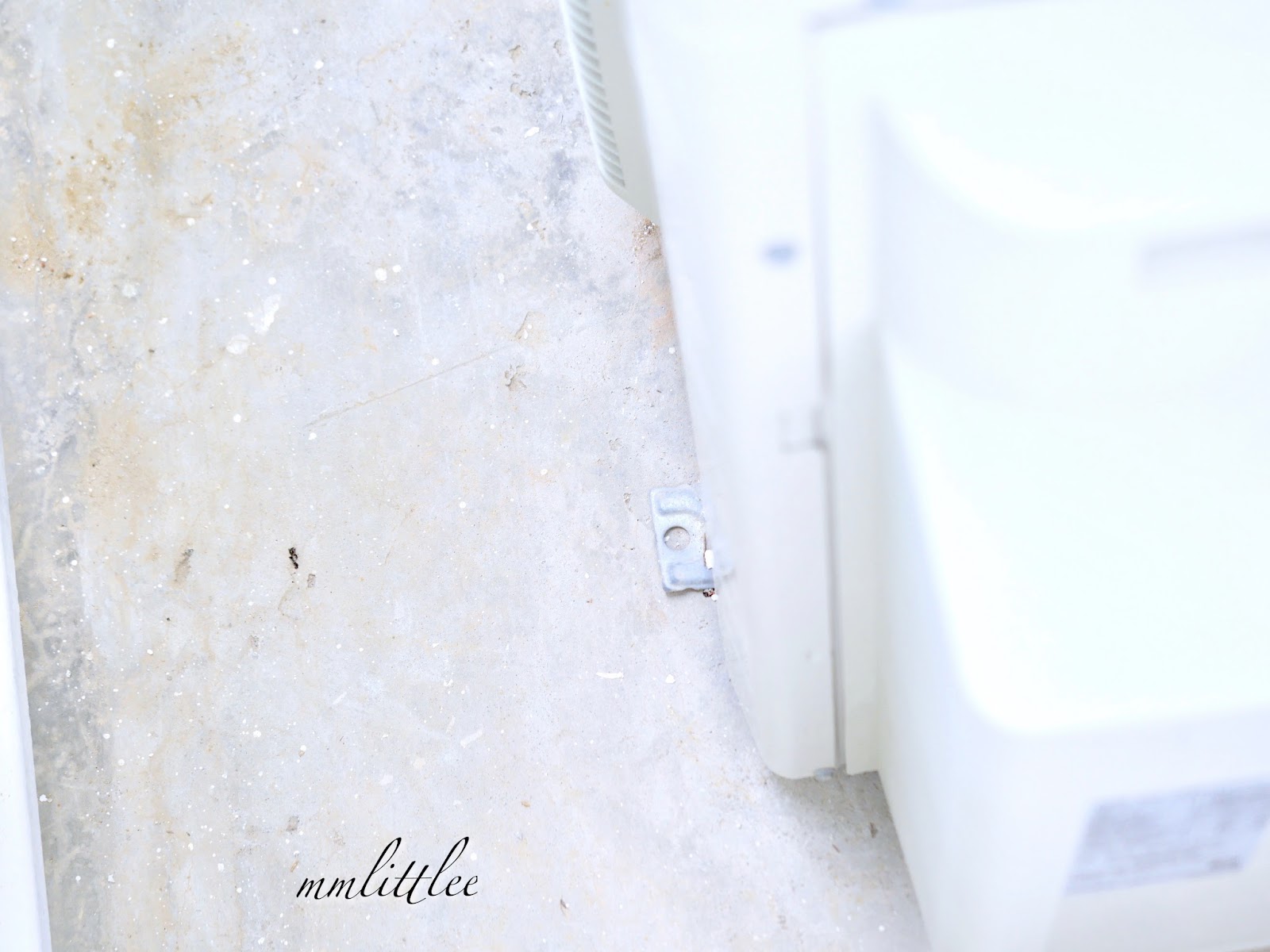 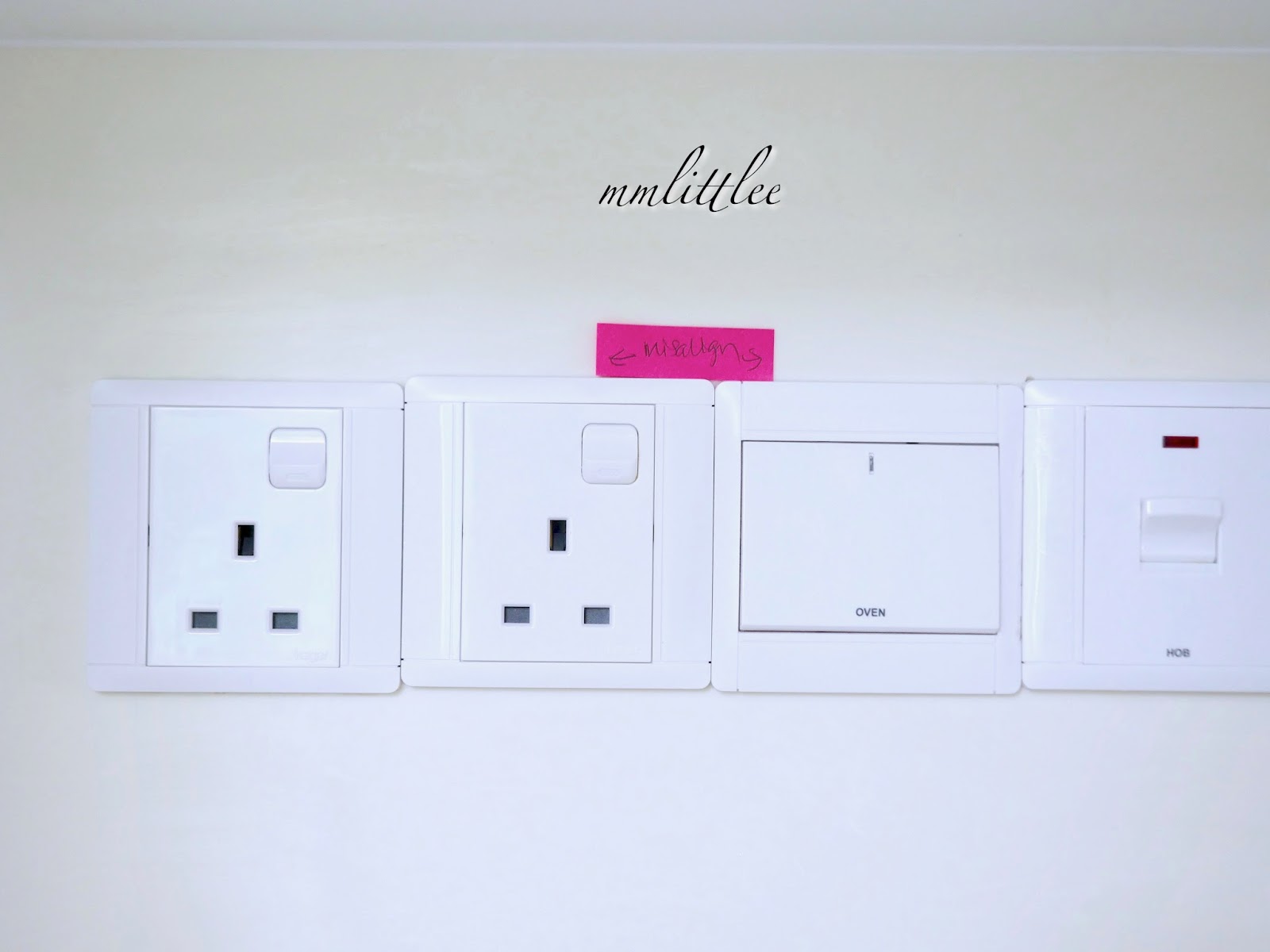 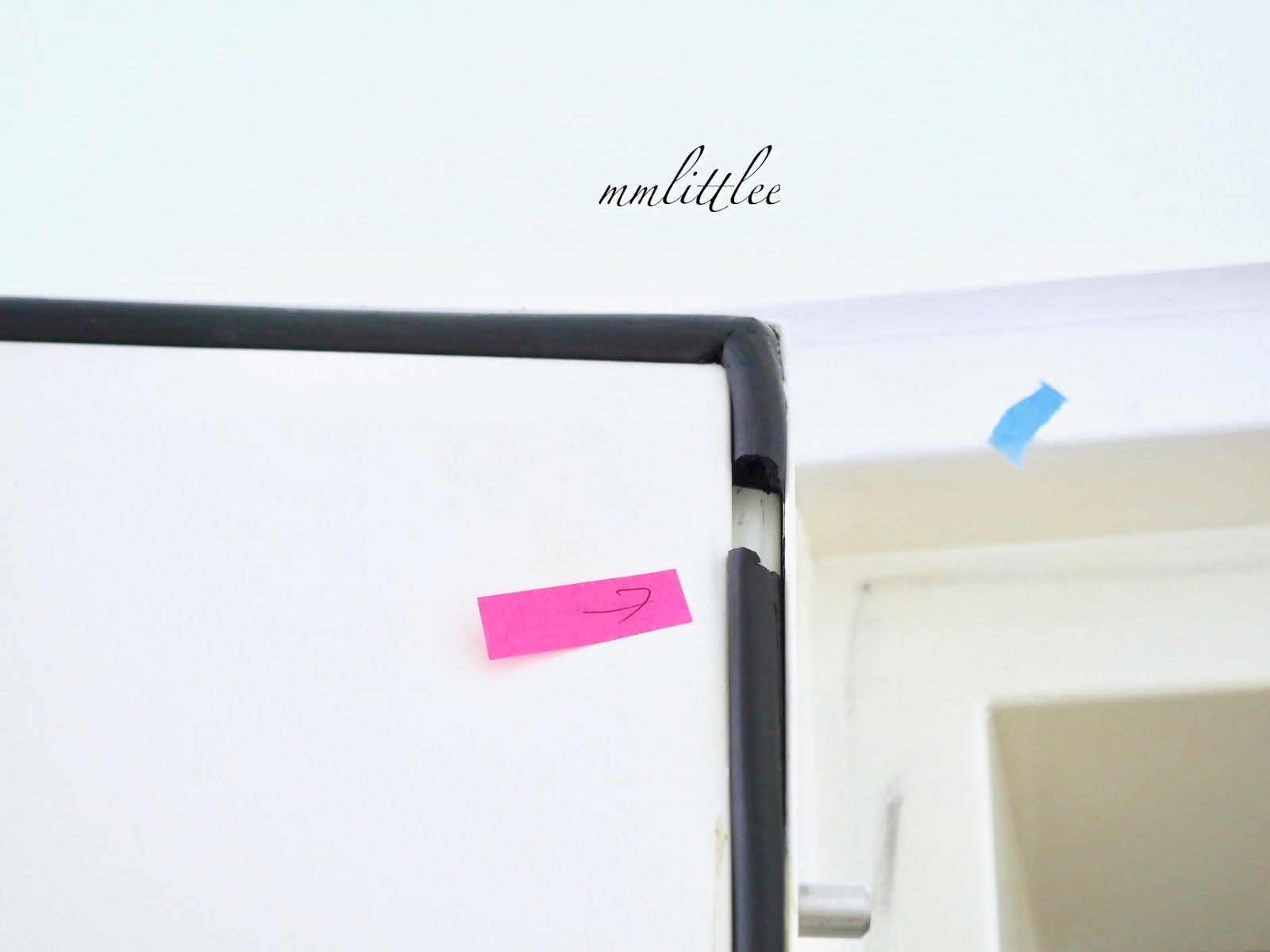 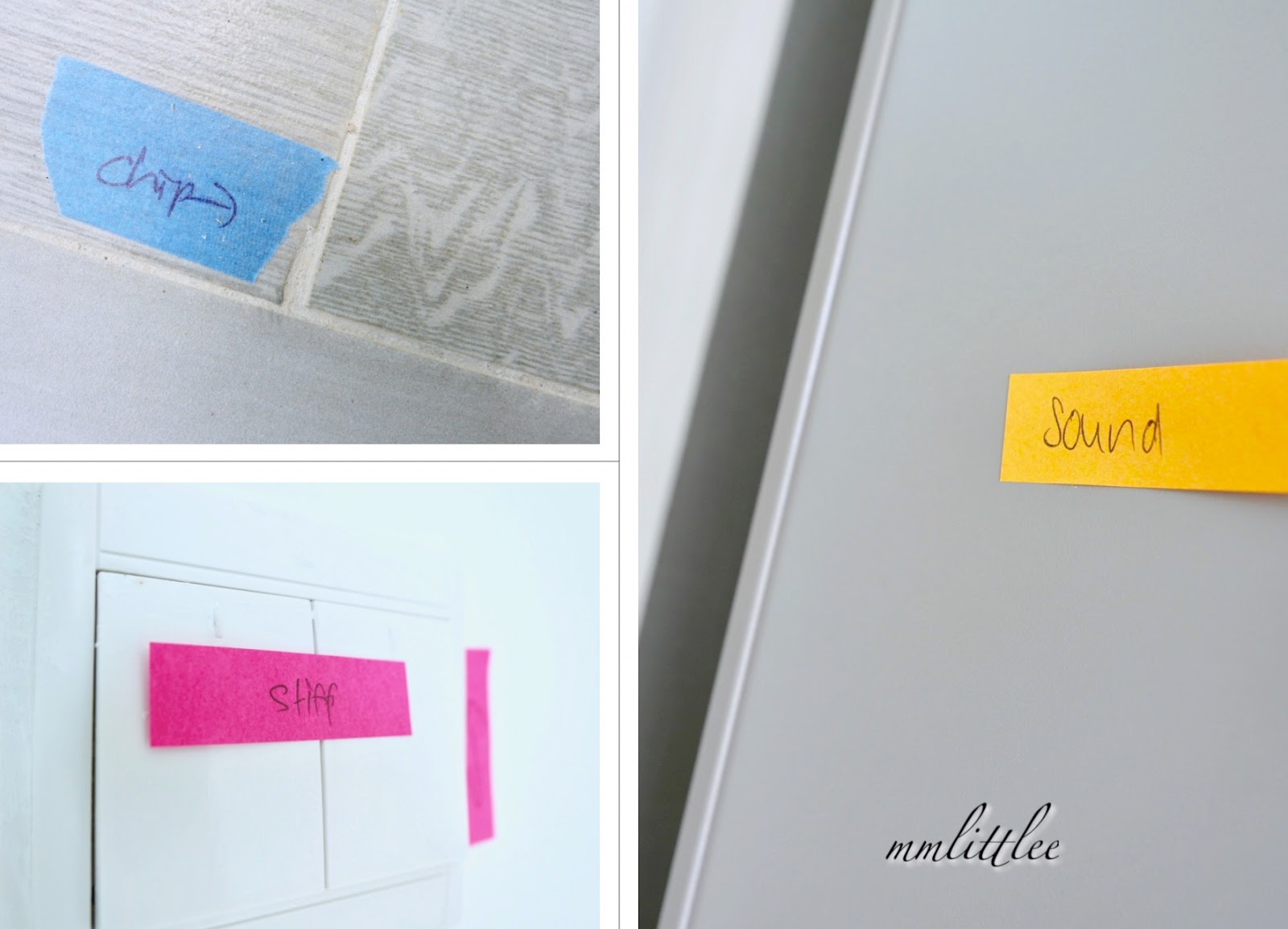 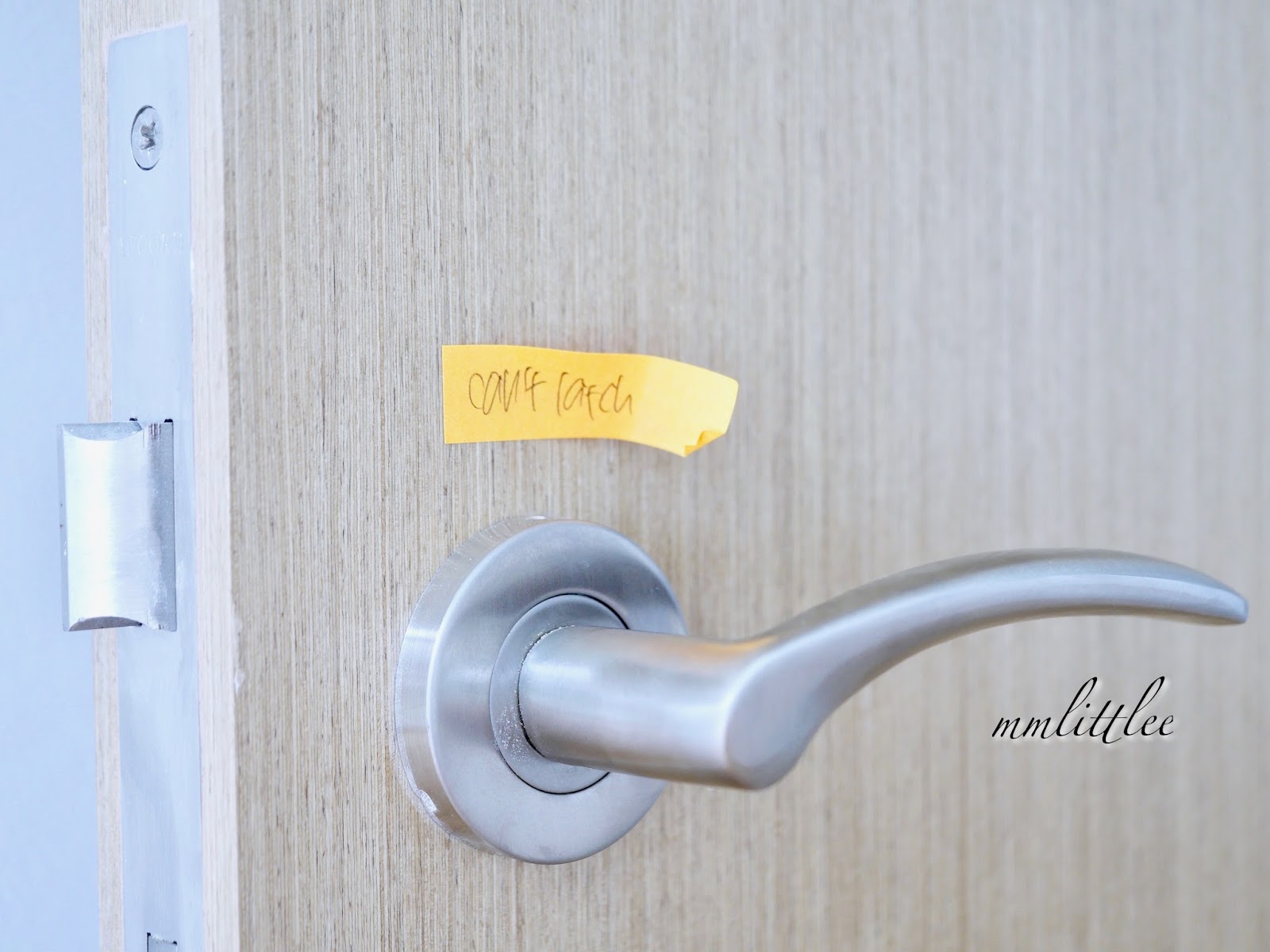 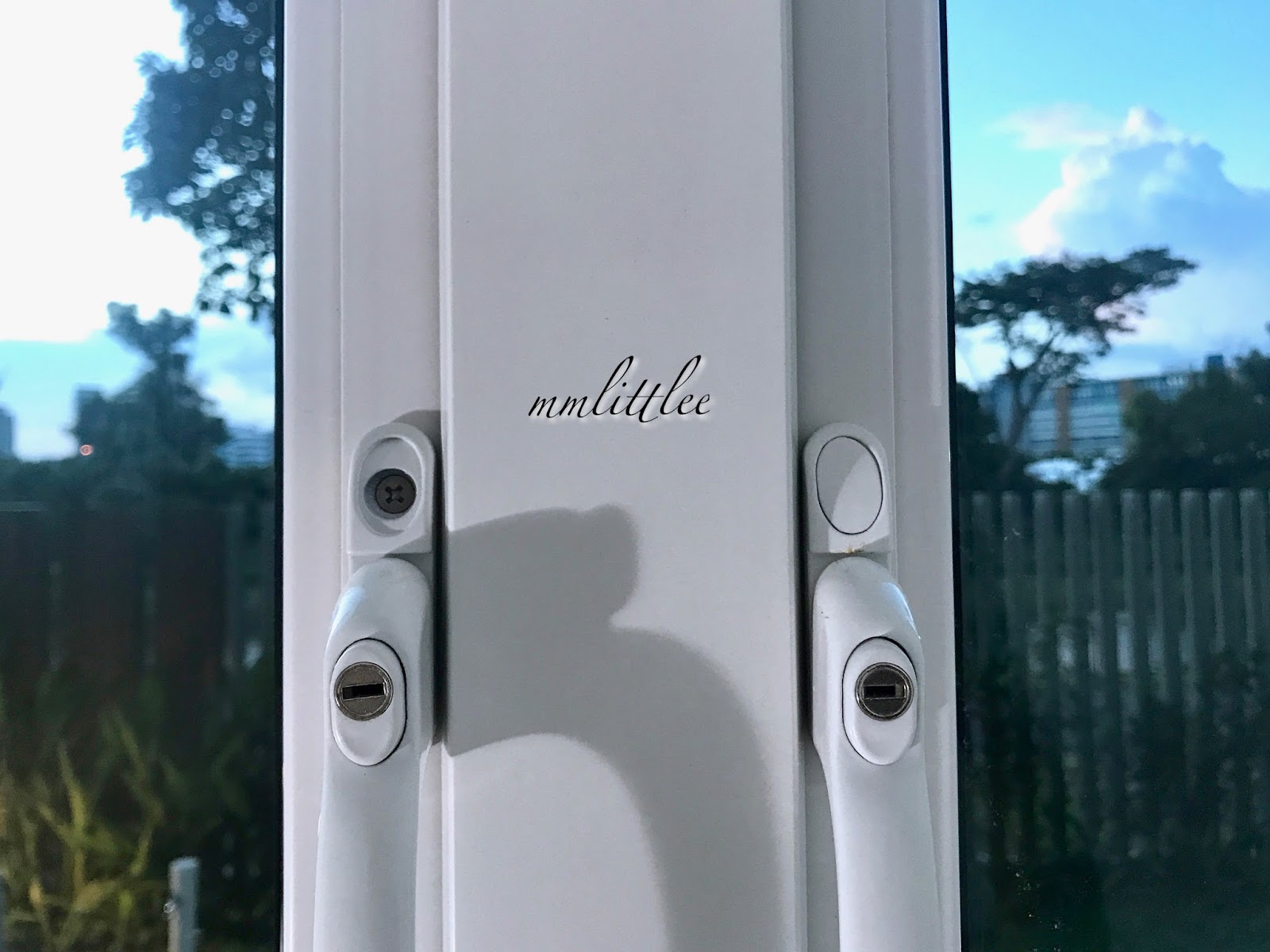 Just before I sent the forms in for submission, I added one last defect – The air-conditioner in our living room was not working. That made a nice round figure of 120!

I handed in the list with a heavy heart and waited for the developer to call us in for the first joint inspection with myself, Absolute Inspection and the main contractor. 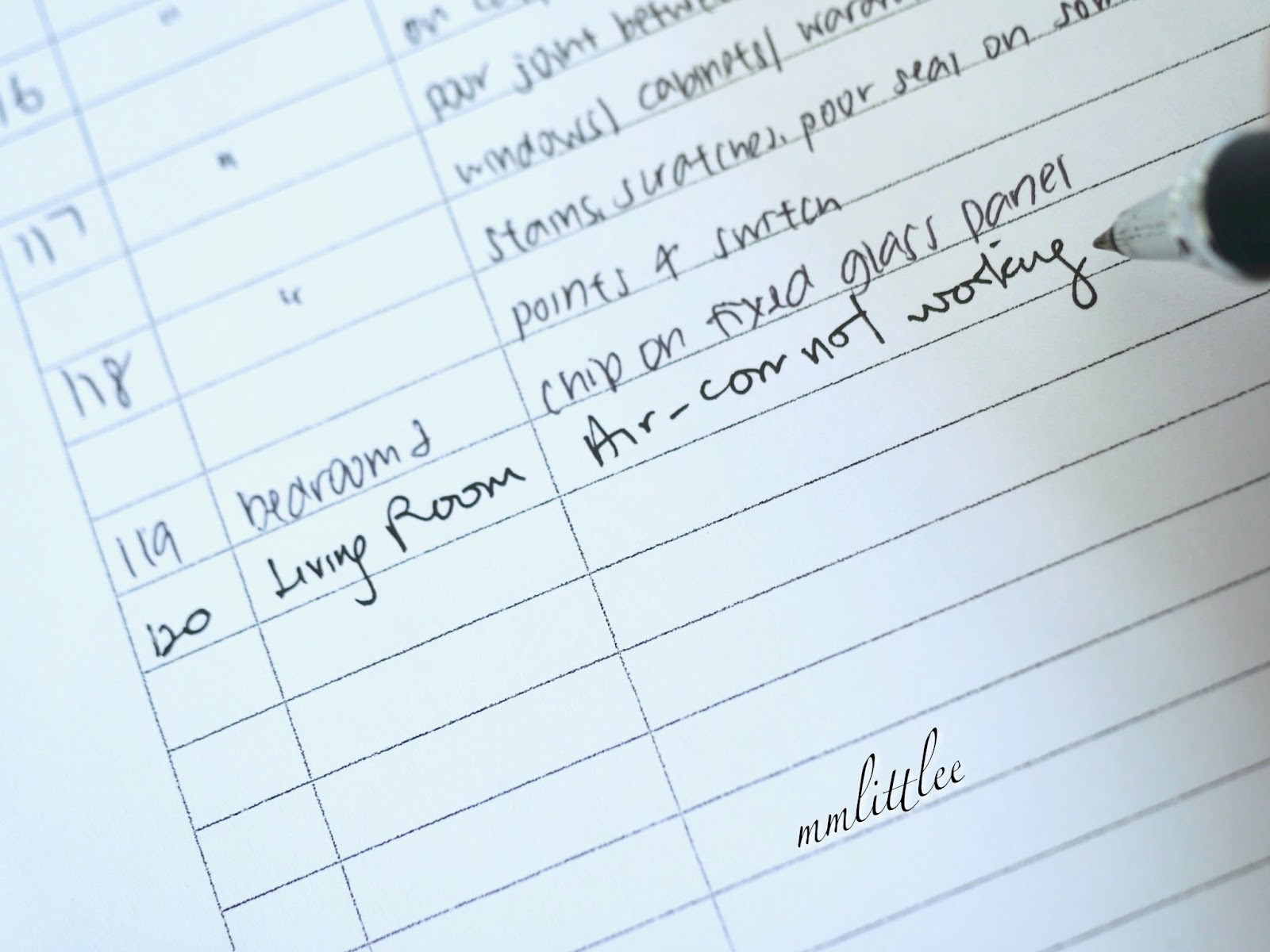 One week later, the first joint inspection was set up.

This time, Wee Kwang came and I was impressed that he could walk-through the developer and main contractor with just the list his colleagues sent to him! Kim and Ben were the ones who inspected the house, not him. So it was truly a magnificent handover.

As our water supply hasn’t kicked in on the day of the first inspection, Wee Kwang took the chance to check the water pressure and toilet flooring for ponding during this visit. I wouldn’t have thought about flooding the toilet with water just to check if it will drain really. Thankful to have a professional who does this day in and out, knowing what to look out for.

It didn’t take very long for the joint inspection because apparently Wee Kwang is familiar with the representatives from the developer and main contractor. He had inspected their previous projects elsewhere. Hence, they knew what he wanted and accepted everything that he pointed out. Everyone took note of every defect on the list to carry out rectification works and here is a visual summary created by the main contractor, showing the extent of defects in the house. 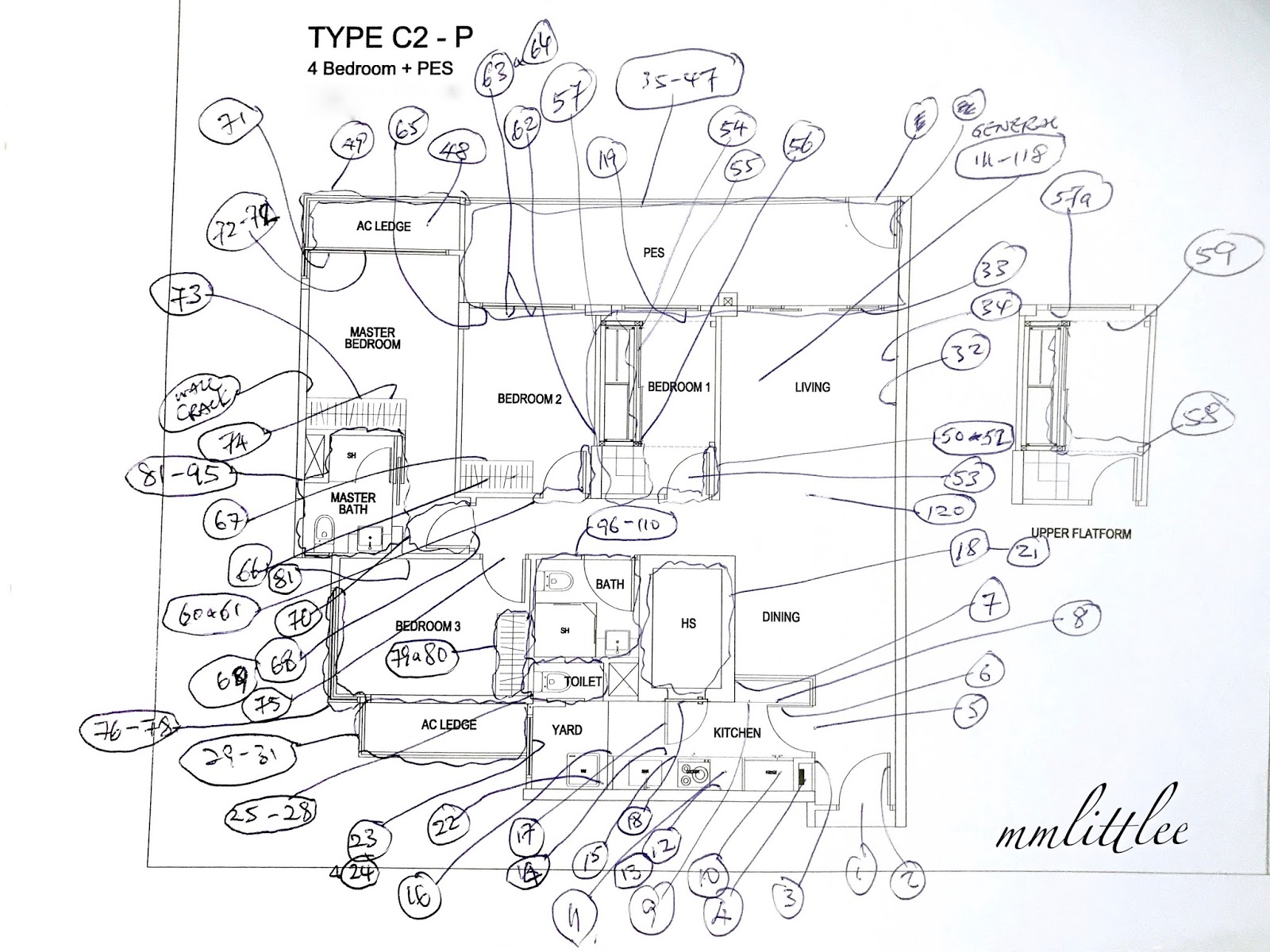 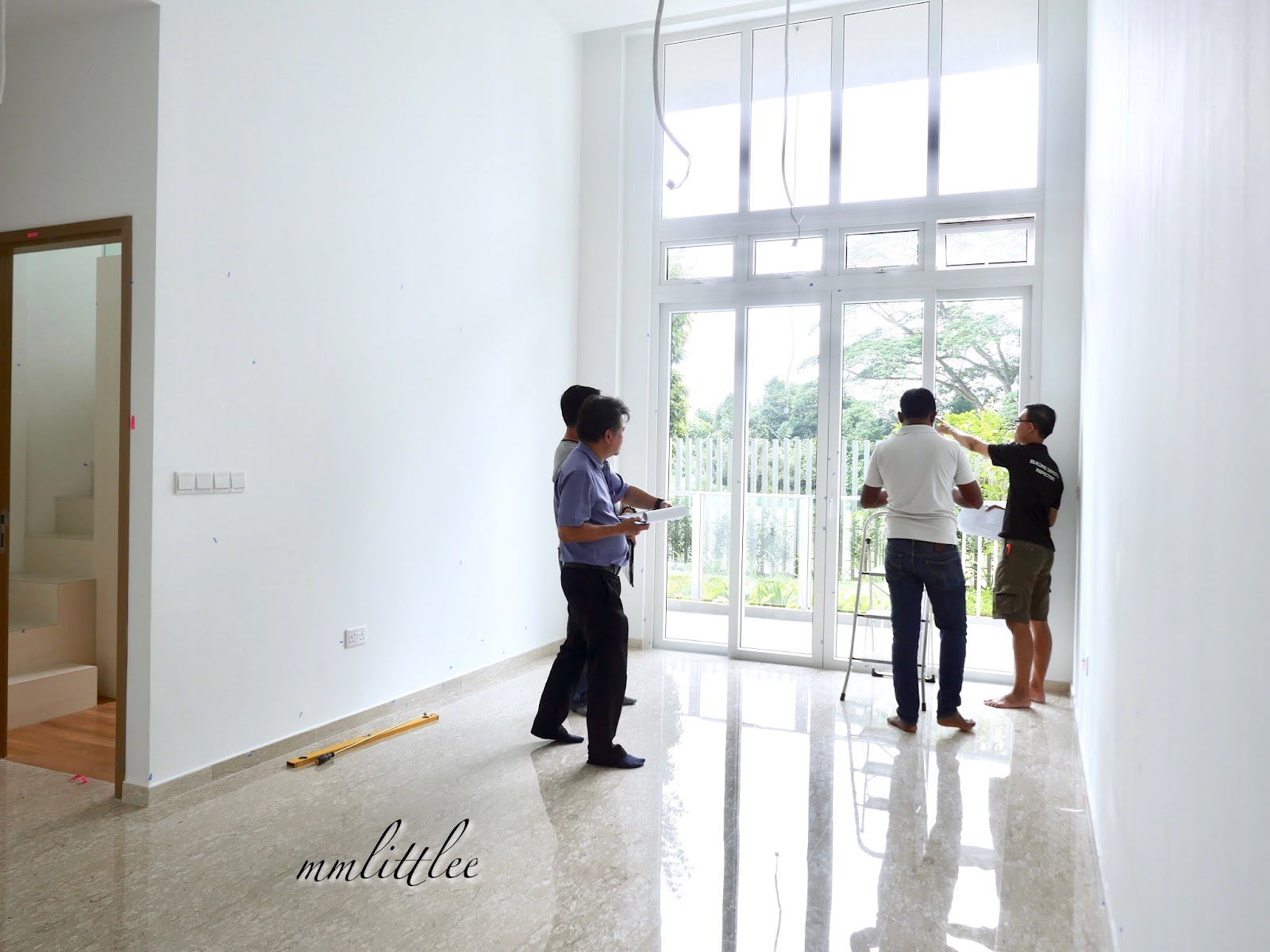 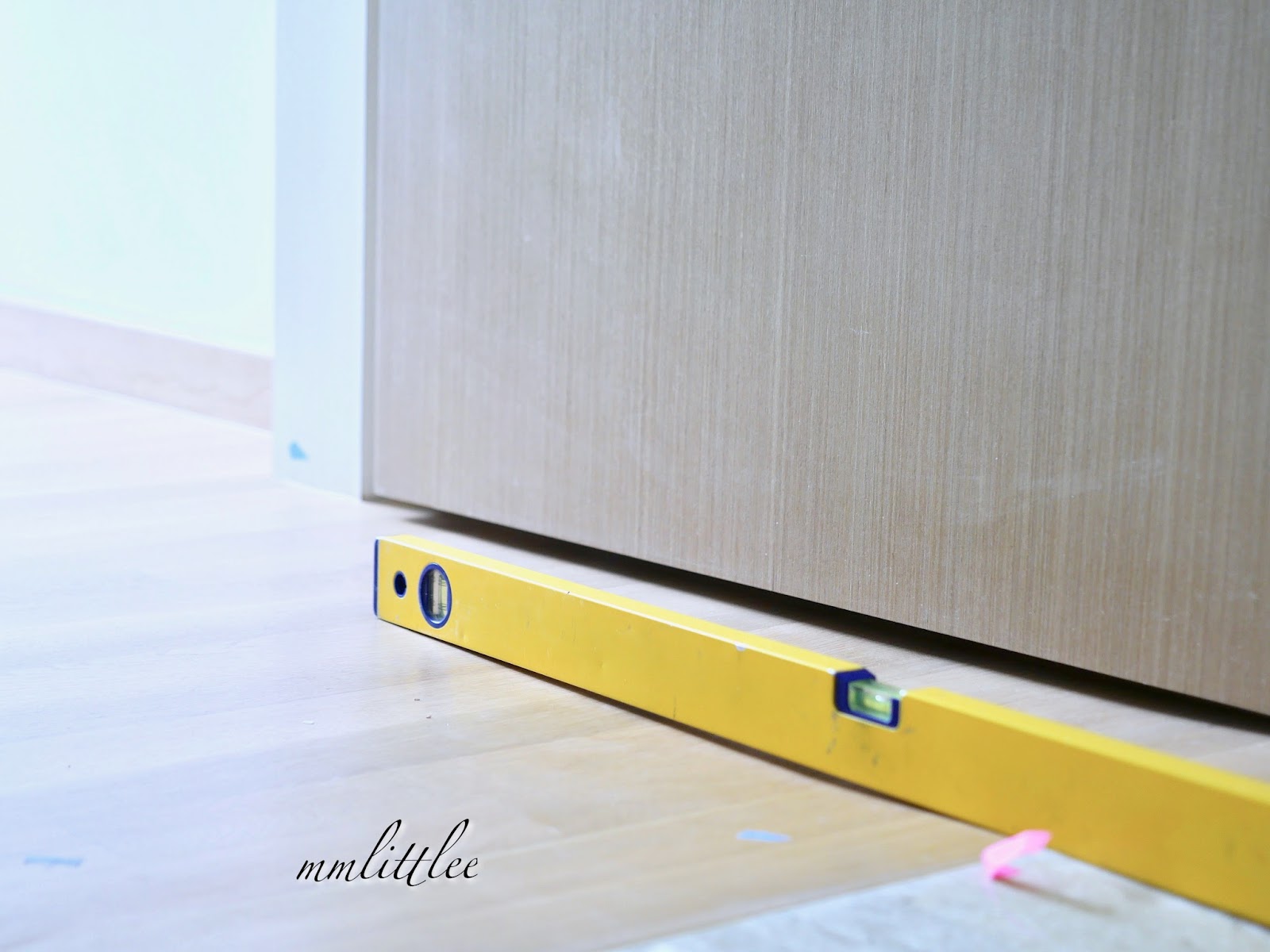 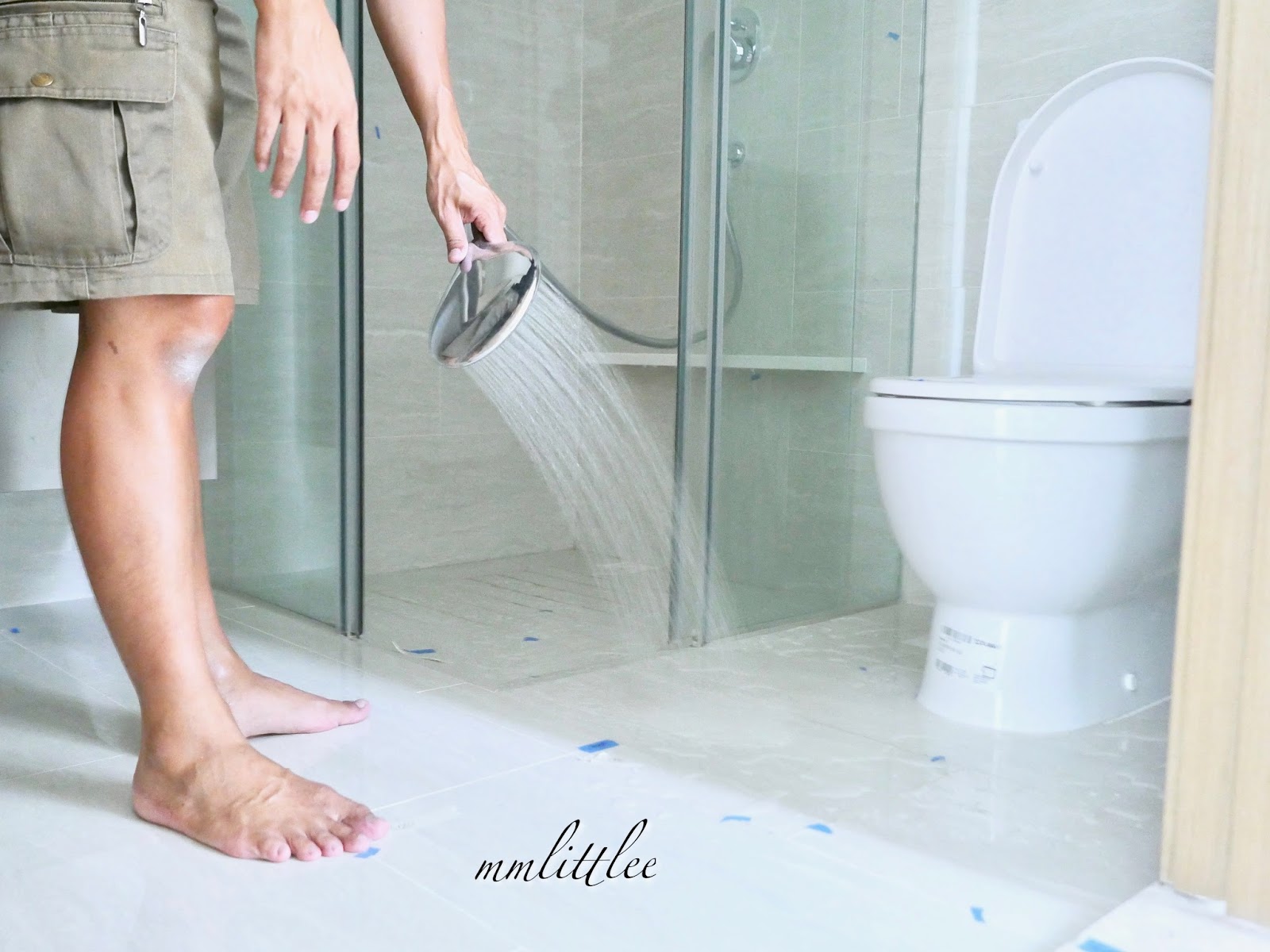 A month had passed. It was time to handover. What I did not expect was that Wee Kwang would have to write a new list of defects that have not be rectified even during that one month grace.

50 defects after 30 days? That is still a lot for me to swallow! These were not even new defects! Oh can they be more efficient and honest with their works?

We put aside only half an hour to have this handover finalised but ended up at #mmlittle家 from 1800 hours to 2000 hours with Wee Kwang and the main contractor! From daylight to nightfall, Wee Kwang had to plug in his trusty portable bulbs into our wall sockets to continue checking defects. 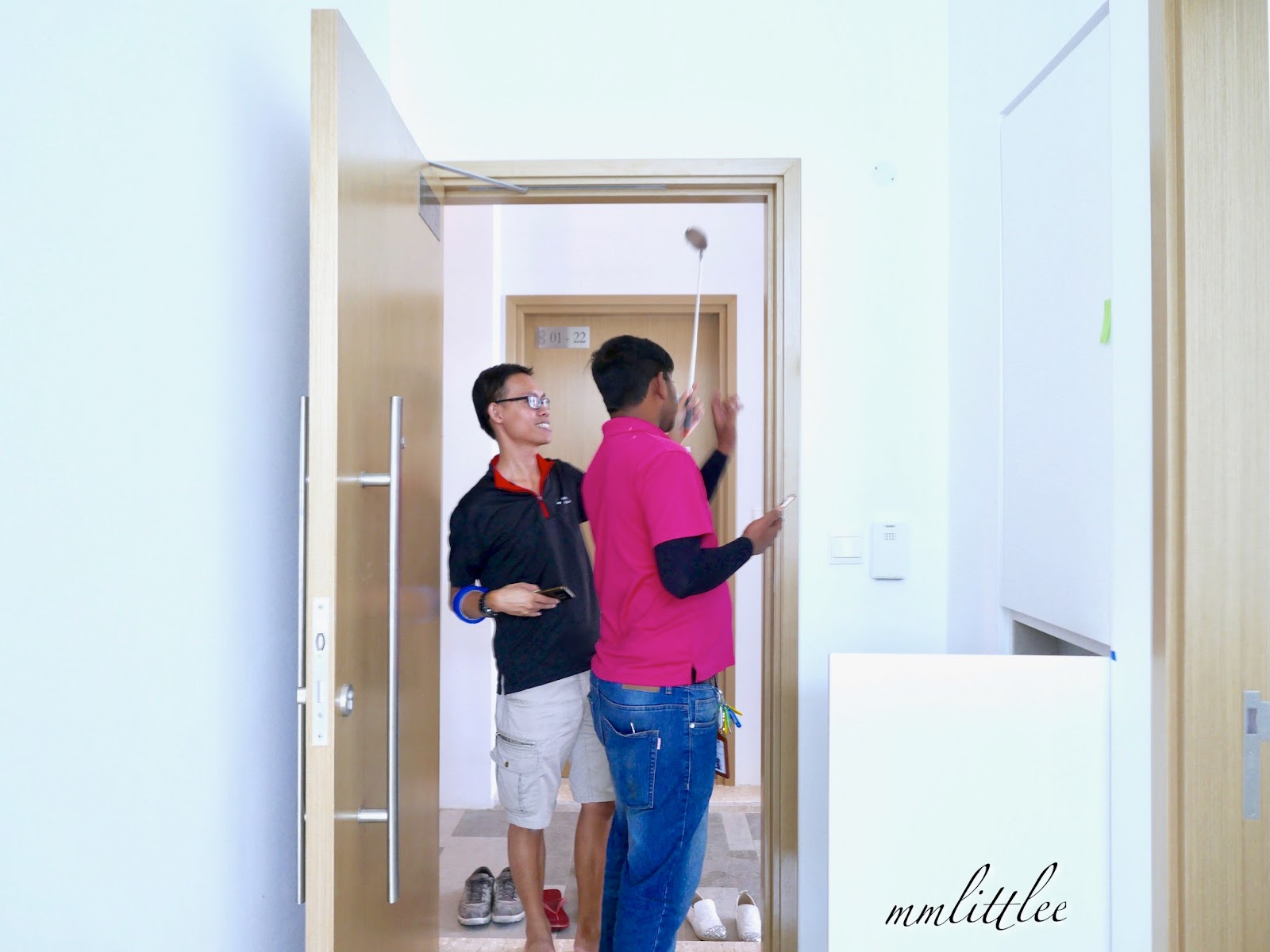 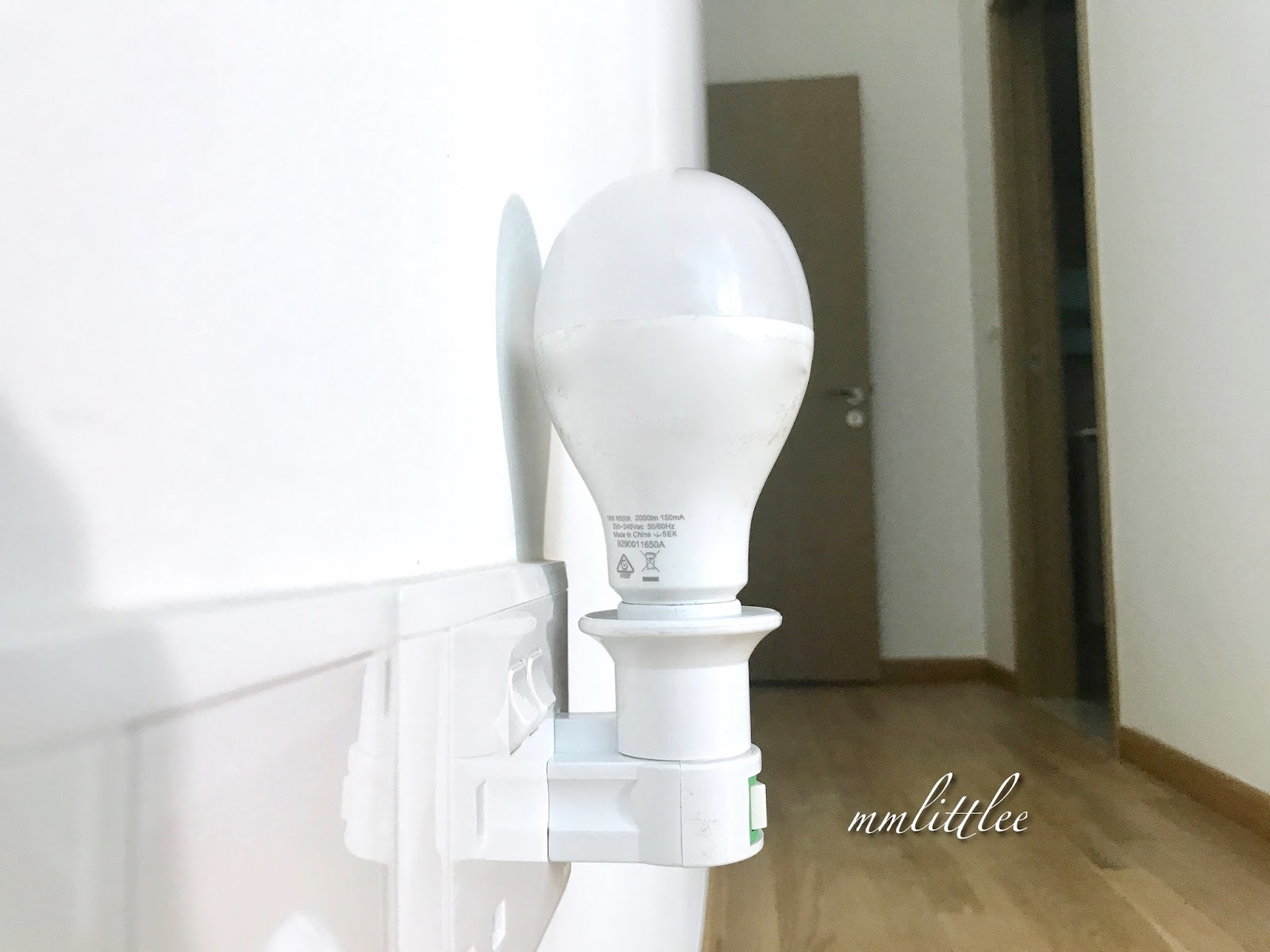 We gave the main contractor another 11 days to work on the 50 defects. THIS HAS GOT TO BE OVER! But no it wasn’t.

There were still defects that haven’t been rectified and Wee Kwang found some new ones including a warped door. I have had Absolute Inspection over for the fourth time and I was getting really tired by now. What seems to be the final handover ended up with works that were not done.

It came to a point where Wee Kwang asked if there were other priorities that I am weighing besides getting all the defects fully rectified. He explained that the bulk of the outstanding items were cosmetic in nature and if I had other bigger priorities on hand like starting reno works on time, I might want to consider letting go some of the non-critical surface damage. I agreed.

We gave them another nine days to rectify the rest of the issues including changing the warped door. I finally commenced by Renovation Works on 20th of September 2017 after two months from key collection.

CHOOSING THE RIGHT DEFECT CHECK COMPANY FOR YOUR HOME

Defects inspection service is NOT regulated in Singapore and there are many companies offering this service without construction background nor experience. With a dozen defect inspection companies in Singapore right now, how do you choose the right one to work with?

I had to do my research carefully to give this job to the right person. Reading on Wee Kwang’s background, I felt most assured to put #mmlittle家 in the hands of his team. Only a handful hire inspectors with real construction knowledge and experience.

Wee Kwang was formerly a scholar with the Building and Construction Authority, graduating with a 1st class honours in Mechanical Engineering at NUS. A former deputy director in Building & Construction Authority [BCA], he was trained in BCA CONQUAS, which is Singapore’s yardstick for construction quality. He has performed more than 2,000 home inspections since 2015, making him the most highly sought-after defects inspector in Singapore. His team combines a mix of expertise ranging from site construction to waterproofing, plumbing and renovations, and is personally trained and led by himself, who has more than 10 years of experience in the construction industry.

My advice as a home owner is to encourage people to look beyond the fees and check on the company’s track records and client’s testimonials as well. Not all defects inspection companies are knowledgeable and well trained. Thankful to have the right men to do the job. Especially when I am solo-parenting this home project because the husband is having a tight travelling schedule for work and school! I felt safe [although mostly clueless] that I had Absolute Inspection backing me up. Most importantly, to have someone to trust. Not only does it gives me peace of mind, engaging them reduces further repair costs in the long run as well!